I'm not sure whose idea this relay was in the beginning (pretty sure it was Crystal's) but it sounded amazing to me.  Spending a weekend in the Vermont mountains with my husband and best friends (and my soon-to-be new friends) running a relay, camping, kayaking.... sign me up!  Planning this get together could have potentially been much more difficult.  Think about it- one couple from PA, one couple from NY, and one couple from MA all congregating in VT.  We were meeting in a place none of us have ever been to and running a race none of us had previously heard of.  But we divvied up the to-do list and met up at the end hotel parking lot the evening before the race. 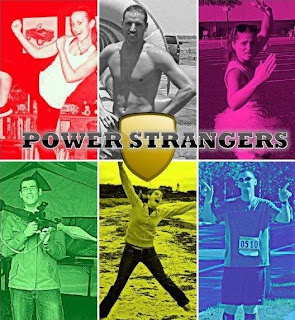 Our amazing team photo by Crystal!

We would have liked to pick up our race packets the evening before, but as usual, my hubby and I were late.  We ended up just going to our start hotel, checked in, unloaded our stuff, then went to carbo load.  We found a nice little Italian joint with a very friendly, patient waitress.  We ate our fill then ordered a pizza to go, haha!  That's how we roll. 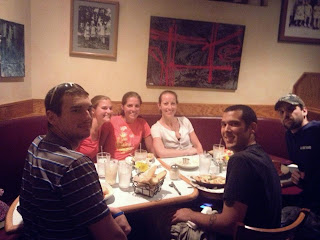 So the six of us went back to the hotel, set our alarms, and said goodnight.  I'm still pretty impressed that we all got up, through the bathroom, checked out of the hotel and loaded back up into the minivan as quickly as we did.  We made it to the start at the Trapp Family Lodge with plenty of time to spare. 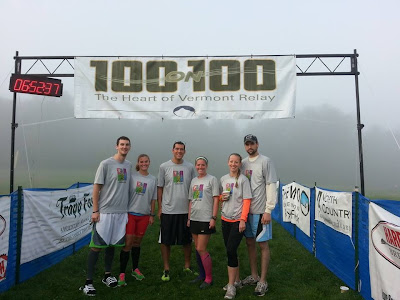 At the start just a few minutes before my 7am start

Coffee is my pre-race Secret Weapon!  Shhh!
We had a nice little pow-wow before the start.  I have no idea if they did it for every start or not, but it was a really nice touch.  All the runners for the 7am wave put their hands in and Race Director Guy said things like, "Is anyone going to work today?  Is anyone taking care of the house or the kids today?"  It really amped me up.  The crowd counted down with the clock and we ran off into the fog.  My first leg, the first leg of the entire relay, was also the shortest leg of the entire relay at only 2.5 miles.  I knew I was going all out for this, holding nothing back.  It started with what seemed like a long descent into the woods, then eventually it turned into rolling hills, then back up toward the finish.  I knew we were getting closer when the woods started to thin out.  I saw the transition area and Jamie's red shorts and worked to get the slap bracelet off. 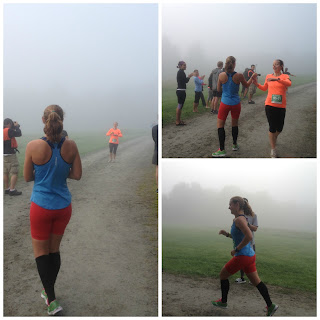 I ended up finishing my 2.5 mile leg in 17 minutes 30 seconds, which works out to a seven min pace!  It felt A-M-A-Z-I-N-G!!!  Jamie was off on her first leg, a 6.4 miler with a gnarly descent to start then some nice climbs to finish. 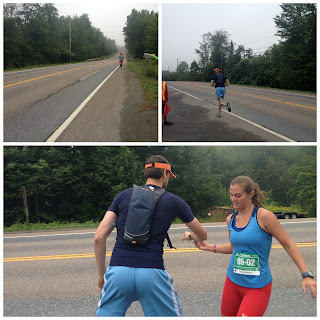 She came in looking strong for her hand off to A-A-Ron.  Her average pace was 8:40.  Can you say rock star?  Aaron's first leg was seven miles.  He and I have never done a relay before.  He's the kind of guy you love to hate.  Naturally athletic.  This kind of thing comes easy to him.  His "training" consisted of half a dozen six mile runs.  Nevertheless, he finished with an average 7:48 pace.  He handed off to Joe, who was also new to relays. 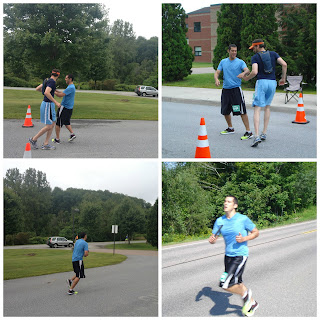 What I remember most about Joe's first leg was the terrible, terrible hill, because that's all his leg was!  It was a 5.5 mile leg with about 4 of those miles being UP!!  I remember driving by him and cheering, and then all of us groaning as we drove up what he would soon be running up.  He did an amazing job though coming in with an 8:40 pace.  He would be handing off to Crystal. Until this point it was pretty cool and cloudy, but the sun had broken through the clouds and it was warming up quickly.  Crystal slathered on the sunscreen to prep for her first leg, a relatively flat 5.2 mile run. 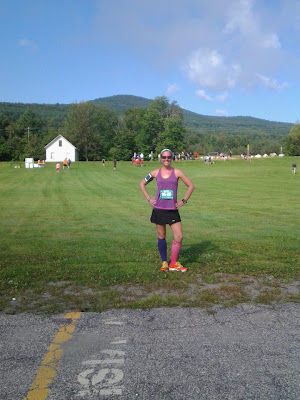 She, of course, nailed her leg with an average pace of 8:15.  She handed off to Mike who would be running a difficult all uphill 5.8 mile leg.

﻿
Mike came hauling a$$ into the transition area with an average pace of 8:30, he's just that awesome.  And with Round 1 complete, I would be heading off for my second leg.
﻿ 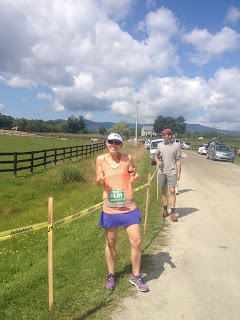