So Mike just killed his first leg and I was off for my second leg, a 6.6 mile run with the first 3 being DOWN and the rest with an easy climb up. 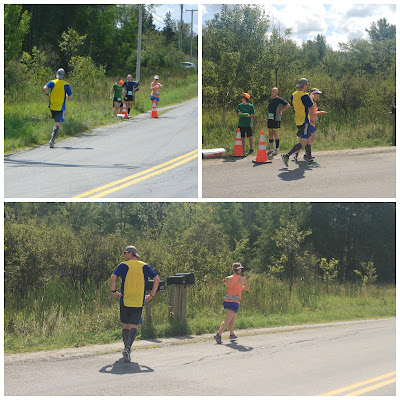 I was feeling like the downhill was never going to stop, until it did.  I ran through a little town and the folks directing traffic were really great.  I got to run across a nice covered bridge.  And then the uphill started.  I made it to the transition area with an average pace of 8:20 then learned of all the excitement with the van.  Apparently the Check Engine light came on and it had started making a weird clunking noise.  Fortunately we have a gifted mechanic on our team (so what if he's a flight mechanic?)  But Joe got the van up and running again.

I handed off to Jamie and she was off for her second leg, and the longest of the whole relay at 8.3 miles.  I was thinking it was really hot at this point and feeling pretty bad for her.  I thought that maybe we should stop to give her water, but ultimately we forged ahead to the next transition area.  She of course conquered this tough leg with a 9:17/pace.  She handed off to Aaron who would be running a flat and short 3.5 mile leg.  We quickly piled into the van to get to the next transition area ASAP knowing it wouldn't take Aaron long to get there. 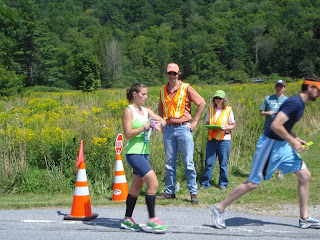 We were right and he came flying in with a 7:42/pace to hand off to Joe.  His would also be a relatively flat leg with a distance of 4.2 miles.  He nailed it with an 8:10/pace and handed off once again to Crystal.
﻿ 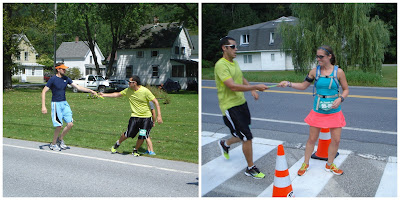 She took off for her 7.3 mile leg, and it was still hot but I think we were all beginning to adjust to that.  We discussed stopping to give her some water but we got the go-ahead signal as we passed her, so we went ahead to the transition area.  She made it there in no time at all with a 8:50/pace and looking strong.  Crystal handed off to Mike for his second leg, a mostly flat 5.3 mile run.  We all anticipated that he would kill this leg too so we booked it to the next transition area.  We were right because he made it there with an average pace of 8:03. 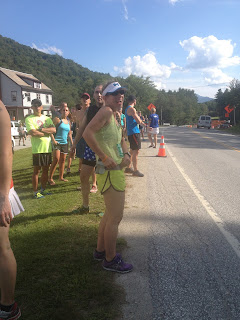 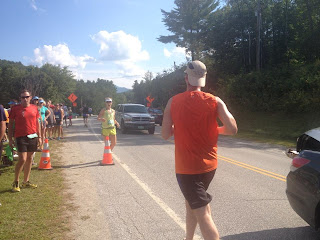 I nearly killed myself by tripping over that dumb cone into a moving car, but crisis averted and I survived!  I was very excited about my third (and final) leg.  I knew it was going to be the hardest for two reasons.  #1- I already ran twice this day and #2 it was my longest leg with the toughest terrain, the Vermont mountains!  To be continued....﻿
﻿
Posted by Janell at 9:23 PM