Run to the Rock Half Marathon 2013

I had a week of vacation coming up and my poor hubby did not.  So what's a girl to do?  I decided to split the week, half at home with my family and half with my BFF Crystal.  Once I had finalized the dates I'd be visiting I get a text from Crystal informing me that there is a race on the weekend I'd be there, 5k, 10k, and half marathon.  And what else would my BFF and I do when we get together but run a race?!  So I arrived on a Wednesday.

Thursday we had a nice 5 mile trail run and I met a new friend Stacey!

Friday we ran 5 miles along the canal with Crystal's hubby (and my favorite Coastie) Joe.
Then Saturday was race day!  Run to the Rock Half Marathon.  I had a sub-2 hour goal in mind.  I had a lot of doubts, but deep down I knew I could do it.  I knew I was capable.  But sometimes, stuff happens and things don't go as you had planned or hoped.  Crystal is deep into training for her MDI Marathon, and while she wanted a sub-2 as well, she wasn't sure if she was going to go for it.  So on the morning of the race I decided it was on!  If everyone else believes in me, maybe I should too.


We had picked up our race packet the night before, so we arrived, parked, and boarded the shuttle to the start.  There was a crazy line for the port-a-potties, but we made it to the bag check and the starting line with a few minutes to stretch.  We couldn't hear a thing, and all of a sudden there was an air horn and the crowd started to move.  We had decided to run our own races, so we lost each other right at the start.  The crowd took about two miles to de-clump, three to get into my stride.  I decided I was not going to look at my watch other than to check my time at Miles 3, 6, 9 and 12.  During my periodic checks I was reassured that my pace was where I needed to be to reach my goal.

I gotta say, the volunteers did a great job!  There was plenty of water at all of the water stops and the people directing traffic did an amazing job.  Thanks to all the wonderful people who make events like these go smoothly!  So anyway, back to the race.  The course was described as very hilly and it did not disappoint!  None of them were bad, its just that there were so many of them!  There were few spectators along the course, but there was a bunch of little kids (I assume associated with The Boys & Girls Club) along side the road cheering and clapping, and it gave me such a tremendous boost.  So thank you to them!

Remember how I said I lost Crystal at the start?  I had no idea if she was half a mile ahead of me or on my heels.  When I crossed the line I turned around and there she was!!!  She said she wasn't sure she had seen me until the final stretch, but dang it!  We could have been running together the whole time! 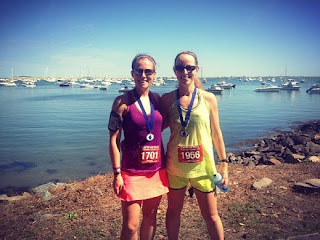 ....and later ice cream on the beach!
What a fun trip!  I'm sad to say goodbye but know that more adventures await us in the future.  Credit to Crystal for ALL the pics in this blog.  Someday (soon I hope) I'll have a real phone and take my own pictures! 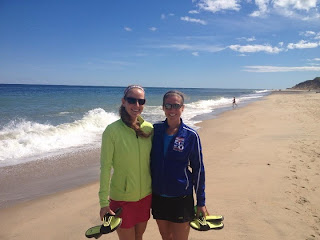 Email ThisBlogThis!Share to TwitterShare to FacebookShare to Pinterest
Labels: half marathon, Plymouth, Run to the Rock
Location: Plymouth, MA, USA