On Saturday I participated in the Hardcore Mudd Run in Philipsburg, PA with Aaron, my sister and her boyfriend, and their two friends.  Their website describes the event as such, "HMR events are neither a competition nor a race but instead about the person next to you; helping your team and other fellow mud runners through the course. Each event will push a person to his or her limits in a 5 to 10 mile mud run with a unique combination of land and water obstacles designed to promote skill building, camaraderie, physical fitness, mental stamina, social communication and interaction."
And if you're interested in their website, here is the link.

We registered for this event back in March.  With a coupon code we still paid $70 a person to participate.  I felt (and still feel) that it was a lot to pay.  But I had never done any kind of mud run before so I was excited and optimistic.  I'm going to go straight to the punch and say that I will not do this event again and I would not recommend it to anyone.  With that out of the way, I can begin my recap.

We registered as a team of six and named ourselves Hakuna Macruddy, a play on the song from Lion King.  The night before Brandi and Teresa made these awesome shirts for us to wear.  We all selected Lion King related nicknames too, except for Aaron (see below!) 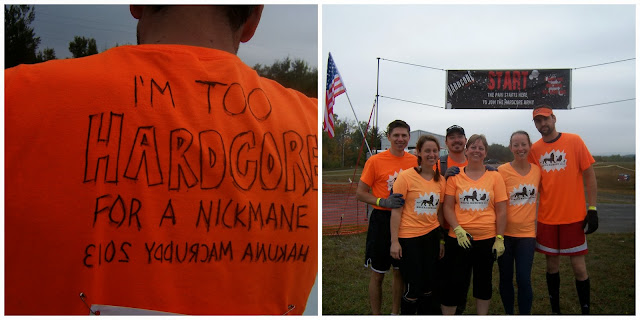 From left to right- Zazoom, T-Moan, sKar, Rafi-B, Runfasta, & I'm too Hardcore for a Nickname

We were in the 9:30 start wave, we were pretty sure.  Some on our team received a cryptic email saying waves had been eliminated and that the first email didn't reach all intended participants.  But we started at any rate.  This particular location for the HMR was 6.5 miles and was to have 18-20 obstacles.  Obstacle #1- Fire Hose Gauntlet- two fire hoses at the start, brrr and ouch!  Then there was a lot of running.  I was surprised.  I thought with 18-20 obstacles in 6.5 miles that they might be one after another.  But we ran, ran, ran until we got to a swamp, Obstacle #2.   And man did it stink!  Once through the smelly swamp we made our way to Obstacle #3, Up & Over- a series of three walls that got progressively higher, starting at 8 feet and rising to 12 feet.  High enough that you could not get over by yourself, you had to rely on others.  The first two weren't that bad, but the third was seriously hard to get to the top, and seriously scary once you were there.  How the heck were you supposed to get down?!  But we all six made it.  We learned after the fact that the ONE event staff standing there had dead batteries in her walkie talkie.  Glad none of us broke our damn necks falling off the wall.  Obstacle #4 was a dirt tunnel that was pitch black at points.  The worst part about that was the way all the rocks you couldn't see chewed up your knees.  Then it was another long run to Obstacle #5, Lost in the Woods.  You knew you were there when you saw orange arrows pointing in opposite directions.  We weren't lost all that long before coming to Obstacle #6, Paint Ball Run.  This was a very short stretch of hay bales that you could crawl through and avoid being hit, or try to sprint through and take your chances.  But these guys were snipers that train all year for this moment.  Our whole team slithered. 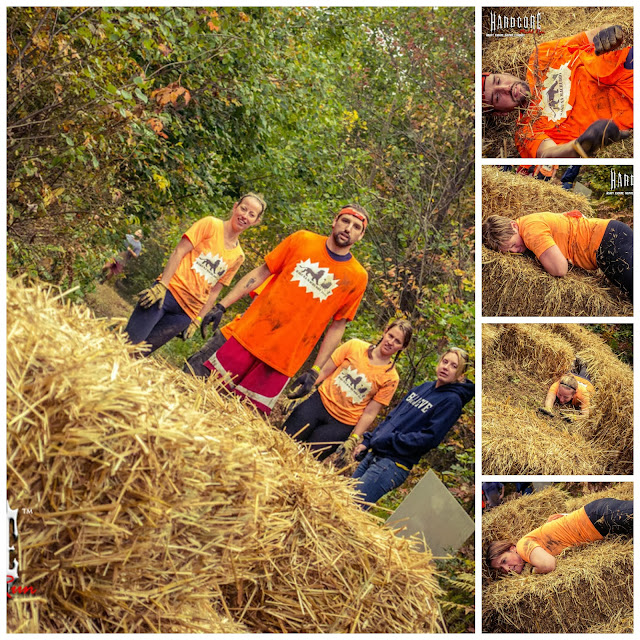 Then it was run, run some more to Obstacle #7, Sand Bagger.  You guessed it, one mile with big heavy sand bags.  However once you dropped your bag at the end of the mile you were rewarded with an aid station offering bananas, water, and a gigantic bag that once held candy.  Sadly, we only saw it empty.  Just down the hill was Obstacle #8, Cargo Mountain.  Teamwork in action already when we came upon it, there were five people per side anchoring the nets.  We were told it was nearly impossible to get up without the human anchors.  So we took peoples' places so they could climb and then people took ours.  This was fun.... til I got to the top and had to swing over to the other side to make my way back down.  But, once again, we all survived.  Obstacle #9, Out & Back, which was simply run up and over a hill, then turn around and run it again, yawn.  Then run, run, run to Obstacle #10, Beam Me Up.  This one was neat.  Two narrow beams placed over water parallel to one another, three sets of them with landing pads in between.  Some people teamed up, some balance beamed it, my team members and myself put our feet on one beam, hands on the other, and shuffled across.  Then a short jaunt to Obstacle #11, Electric Avenue.  This one I despised.  We got to slither through the mud under electrified wires that were unavoidable.  Imagine those pretty Christmas icicle lights strung one line after another only inches from the mud.  Aaron and I were both shocked only four times each.  The last time I got shocked it was in the face and a few choice words flew out of my mouth.  We talked to a few people who had been shocked 12-15 times, and to three people who had lost consciousness.  Fun, right?!  Also worth mentioning is that there was a bottleneck of people waiting to be electrocuted and a man comes up running his mouth, "You can go more than one at a time here!!  I'm the race director, let's move!!!"  A-hole.  Next was another aid station, water, ripped up bagels, and another empty bag of candy.  And a volunteer too busy shoving stale bagel down her throat to do any volunteering.  Unimpressed.  Obstacle # 12, Down  Dirty.  This was a very sloppy, muddy pit you had to crawl under barbed wire through.  Not too bad, and actually the mud was soothing to the cuts I had acquired to this point.  Obstacle #13, Mission Impossible, two walls set at 45 degree angles in a V-formation.  The one you approach to start has a rope to help you get up (hard), then you slide down to the ground (easy), then a rope on the second wall to get up (semi-hard), then no way down but to jump to the ground (hard).  Zazoom, Rafi-B, and sKar all suffered minor injuries thanks to this one. 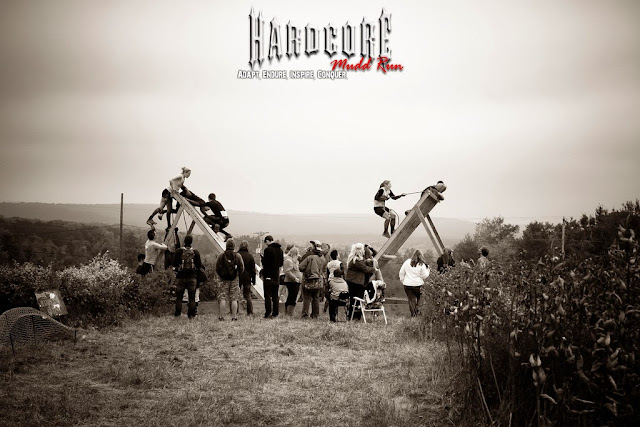 Obstacle #14, Hands & Knees- two long stretches of chain link fence staked to the ground that you had to crawl under.  Chain link gives a little, but not much, so this one was physically challenging.  We chose to go on our backs because our knees were so cut up.  So we slithered under, pushed the fence up, shifted our bodies, repositioned our arms, etc, etc.  This is when T-Moan got a bad cramp and wanted out.  It took a couple minutes to get her out, then several more minutes for the medic to arrive.  The event staff was more concerned about getting her bib than about her well-being.  Heaven forbid someone who isn't "Hardcore" get the two Busch beers and the $0.50 dog tag at the end.  Whatever.  She and Zazoom left the course but urged us to finish.  Obstacle #15, Hay!  Just three of those big, round hay bales in pyramid formation you had to get over.  Cake!  Obstacle #16, Welcome to the Jungle (aka Mystery Box!)  This one was probably my favorite.  A plywood box that was pretty dark inside.  You crawled through one hole close to the ground, then through another hole high in a wall inside, then another low hole, then over a bunch of 2x2s criss-crossed to the final hole in the upper corner.  Final obstacle, Obstacle #17, Fire Jump, two rows of fire to jump over before crossing into the finish area.  There was a live band playing (pretty cool) and a sign saying "Welcome to the Hardcore Army."  You were handed your HMR dog tag and your "free" Busch beer (let's not forget, we did pay $70 for this.)  Zazoom and T-Moan were waiting outside the finish area since they weren't "Hardcore" enough.  The other four of us chugged some of our beer, none of us took our second "free" beer.  Then we took some photos, and hit the showers.  They get a few extra points for the showers.  Unfortunately, they only had two porta-potties that were out of TP and totally covered with mud and urine.  Eww.  Anyway, we got reasonably cleaned up, changed, and found a pizza place in Philipsburg to eat.  We were RAVENOUS!  All in all, it wasn't an awful experience, but I personally will never participate in another event put on by Hardcore Mudd Run LLC, and I won't recommend them either if I'm ever asked.
P.S. In case you were paying attention, that was only 17 obstacles.  Apparently the three progressively higher walls each counted as a separate obstacle and the two rows of chain link fence each counted as a separate obstacle = 20. (Lame.) 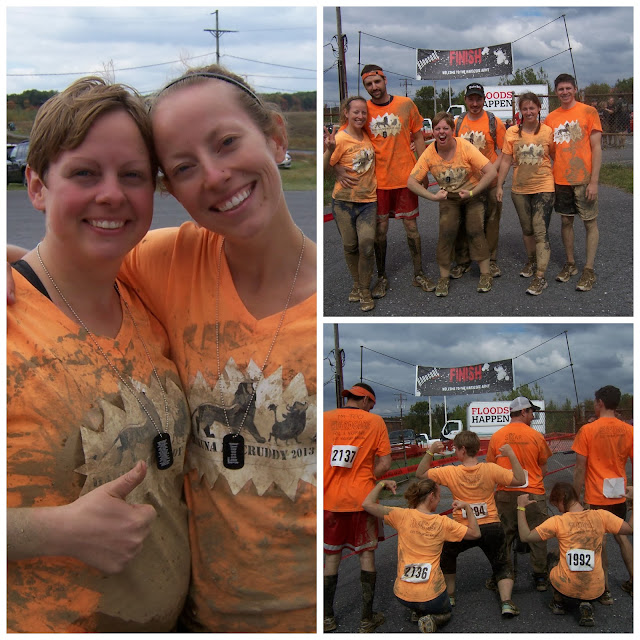