The Midd-West Fest is a homecoming event for my old school district.  They have an auto show, craft and food vendors, and a 5k as part of the festivities.  This was my first running of the Midd-West Fest 5k.  I had my eyes on a new 5k PR coming into this one, knowing I was capable and excited to see how well I could do.  I was pretty sure it was a small race, so I thought placing might be a possibility as well.  Part of the draw of this race for me was the fact that my sisters-in-law would be running it and at the end there would be a One Mile Kids' Fun Run.

Present in the crowd are a few of my old classmates as well as Buff Fitness Girl from the Dam Half.  With her there I had a new goal- keep her in sight!  So I line up at the start, and I was right, it was going to be a small race.  This is the first time ever that I literally toed the starting line.  I was front and center at the start of this one which was super cool, but I think I let the excitement get to me.  Once we started I took off like a shot and was in second place for nearly a quarter mile.  It was a completely unsustainable pace for me and by the half mile two or three men and one woman had passed me (and I was ready to vomit!)  But I kept putting one leg in front of the other, knowing Buff Fitness Girl was behind me and closing in fast.  I was right about her closing the gap because she passed me right before the one mile point.  For the record, my pace that first mile was 6:56!  This was an out and back course and I felt like I would never get to the turn around point!  But eventually I saw it, went around the cone, and who should I see but Erica!  She's the next lady behind me..... and she's in my age group, eeek!  I picked up the pace again fearing that she wanted to pass me as much as I didn't want her to!  I kept hearing these footsteps behind me, and I kept working to outrun them, but they kept coming and kept coming until eventually I couldn't outrun them anymore.  As the owner of those footsteps came up beside me I breathed a sigh of relief when I realized that it wasn't Erica!  Phew!  I was so tired at this point, I still felt like I was going to puke from my way too fast start, and I still had half a mile to go.  Buff Fitness Girl was about to leave me in the dust when I remembered my starting line goal to keep her in my sight so I picked up my pace for the last time.  I crossed the finish line with a time of 23:09, a PR by 1 minute 21 seconds!!! I was the third woman finisher, second in my age group (Buff Fitness Girl was first), and I learned a valuable lesson about pacing one's self. 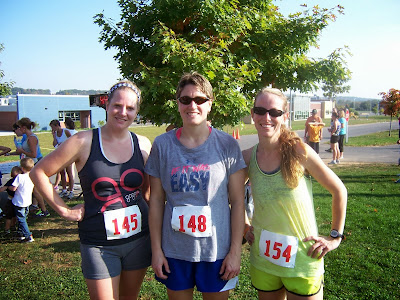 Sisters Celebrate! Alania, Erica, & Me
While walking around at the end I chatted with Michele, the valedictorian from my high school class who is now a physician assistant and mom to two.  She told me that she really liked my blog and that it inspired her.  I told her thank you and that hearing that inspires me to keep at my strives for a healthy life.  We later talked about her doing a guest blog, so keep a look out!
With the 5k over it was time for the Fun Run.  I was going to be running with my four-year old for his first ever race.  I had concerns.  What was he going to do?  Would he even do it?  I tried to pin on his bib but he wasn't having it.  So I pinned his bib onto my shirt above my own bib.  Ready, set, GO!  He's off!  And he's...... giggling!  He ran until he was tired, then he walked a while and he repeated this until we got back to the finish.  And he smiled and laughed the whole time.  It wasn't lost on me that I was sharing something I love with one of my people I love most.  I tried to soak in the moment and imprint it on my brain, the way he smiled, how his laughter sounded, how much fun this was for him.  They tried to give him a medal at the end but he wasn't having that either, so I took it and hung it and his bib in his room.  Maybe someday he'll have a whole big collection of them.  Maybe running will become something that he loves too.  And if it does, I sure hope he lets me be a part of it with him. 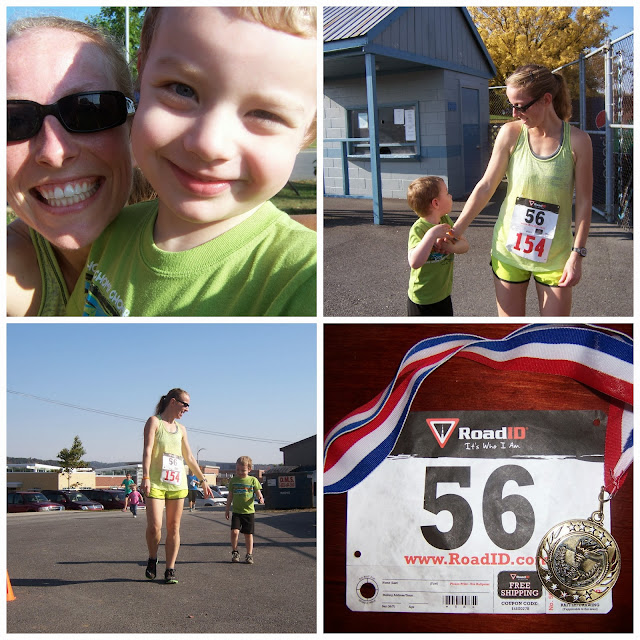 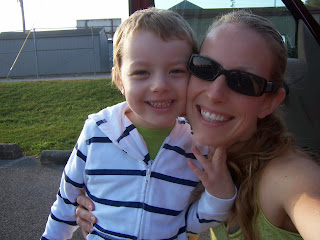