﻿I don't really know where to start with this recap.  Even now, just as all through training, I am preoccupied with my Operation Jack project, from here on out to be known as CJ's Resolution Challenge.  But I'll try to focus on the awesomeness of Race Day.  Aaron and I dropped the kiddos off at his parents the night before.  So Race Day we got up and were out the door around 5:30am, picked up Mom by 6, then it was off to Harrisburg!  There was zero traffic, finding where we were supposed to be was easy, and parking was no problem.  We got to packet pick-up which was really only shirt and bib pick up.  They offered virtual race packets with coupon codes in an effort to decrease their impact on the environment.  Pretty cool, right!?  Then to the port-a-potty line.  There was 26 of them so the line was fast moving.  We brought a poster I made with info about the Resolution Challenge and we were asked about it by two runners from Pittsburgh.  They didn't sound like they'd be out to run my race, but they did make it sound like they knew people how were looking for an autism charity to support.  Serendipity?  It sure would be nice to hear back from them!  Then we made our way to the start.  I had devised a plan to meet with the 3:55 pacer.  My "A" goal was sub-4 hours, and I thought if I could hang with the 3:55 pacer, then I would have a buffer for anything that might come up along the way.  So I met Mike the Pacer.  We talked about my first marathon, my goals for this one, and the training in between.  Then I went back to Mom and Aaron and debated about losing my long-sleeved shirt for a short-sleeved.  Ultimately I decided to keep to the long sleeves.  I put on my bib while Aaron fastened my Resolution Challenge bib on my back.  Gotta get the word out whenever I can, right?!  Thanks for the idea, Cape Cod Runner !! 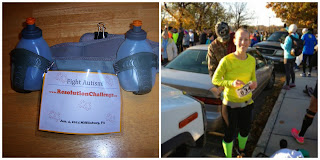 I had been keeping ahead of Mike the Pacer, but I knew he wasn't too far behind.  I  connected with a girl who also wanted to sub-4.  I'm not sure of her name, Alicia or maybe Felicia, but I'll call her Orange Shirt.  I first noticed her around mile 5.  Around mile 8 I noticed she was there to stay.  I didn't mind her being at my hip.  Honestly, I tried to pretend she was my best friend Crystal, but it wasn't working because she was so quiet and had her music blaring, two things Crystal would never do!  Mom and Aaron were doing a great job of on-course support.  I ended up seeing them at the start and around miles 6.5, 10, 15, 18, 20, and the finish!  They were busy keeping up with me!  So back to the race.  I would say the whole first 15 miles were pleasant, fun even!  At some point toward the middle Orange Shirt's friends found her.  They asked how she was doing, and she said "Pretty good!  This girl is keeping a really good pace for me!"  I said, "Aw, thanks!"  I thought about disclosing my difficulties with pacing, but then thought better of it.  I had a friend for the time being and even if she wasn't chatty, I liked her company.

It was around the 15 mile area on Industrial Park Road when the wind started.  And Industrial Park Road is aptly named.  It isn't very scenic or nice.  So I was happy to get to Wildwood Park, even though I knew that's where the biggest hills of the course would be.  The hills were tougher and more numerous than I thought they would be!  Initially it felt great to my legs to use different muscles, but then it just started to make me tired.  I had walked through every single water station (every two miles) except for the one at the end of hilly park at Mile 20.  Aaron ran over to give me my water bottle with nuun in it, so I drank it on the move, set it down, and kept moving, never realizing that I had just gone through an aid station.  After this point the rest of the way is on the same road we traveled out to the park.  I have to say, community support for this race was pretty awesome!  Strangers out there in their front yards holding signs, ringing cow bells, offering snacks and tissues.  It was something really special.  So Orange Shirt and I keep trucking along and with maybe four miles to go a runner from Danville I met at the start of the race in the 3:55 pacing group passes us, and she's moving.... fast!  So I panic!  Is Mike the Pacer right behind me too?!  Do I have to pick up my pace?!  Can I pick up my pace!?!  He doesn't pass us, so I settle down and keep trucking.  Then all of a sudden another Orange Shirt appears, who apparently is my Orange Shirt's friend.  There are about three miles to go now and we're back along the river.  There isn't really enough space to run three wide on the river walk, and I got elbowed out.  It was a low point in the race for me.  I was so tired at this point.  I was convinced the pain in my left foot must be from a dislocated toe, and now my BFF Orange Shirt just dropped me like a bad habit, after eighteen miles together, just like that!  So through the tears (I'm exaggerating, there weren't really any tears) I go run on the road instead by myself.  With less than two miles to go Mike the Pacer really does pass me, eek!!!  And I'm just about out of gas.  I want to keep up with him, but its all I can do to keep moving.  As I approach the bridge I lose sight of him.  I'm pushing ideas of walking out of my head.  Thank God for all the people standing on the bridge and cheering.  I run under the bridge to the ramp that I must climb to get up on the bridge.  Its just a short spit of a hill but it represented a mountain in the moment.  The spectators must have seen the desperation on my face because they came to the rescue.  I hear from behind me, "Go Green Socks!!!"  Then I'm getting a high-five on my left.  Then someone up ahead shouts, "Yeah, c'mon 8-3-4!!!!!"  I couldn't help but grin.  I reached the top, set foot on the bridge, and saw it- The Finish!  Spectators on the bridge were amazing too.  After 26 miles, I felt like I was soaring for that last 0.2.  I did it.  I surpassed my "A" goal with an official chip time of 3:55:29.  Marathon #3 is in May, so watch out for a new Marathon PR!
﻿

I ran into Danville Runner on our way back to the car and congratulated her on a race well run.  She noticed my CJ's Resolution Challenge poster so I gave her a few registration forms, told her to check out the website (because my brain cells weren't firing all too well), and pass it on to her runner friends.  What a successful, amazing day!  There is a lot to be said for human potential.  I really wasn't sure that I could run 26.2 miles in under four hours, until I did it.  I wasn't sure that I could run a marathon at all, and now I've run two.  So when I have doubts about my ability to organize CJ's Resolution Challenge and make it a success, I remind myself of the other things I wasn't sure I could do.  Then I can't help but grin.
Posted by Janell at 9:27 AM