This One is NOT About CJ's Resolution Challenge....

I know.  I know.  You want to hear about it and I want to write about it, but at times I display a little OCD and must do things in sequence.  So first I must write about Santa's Seven Miler and my year end mileage.  Don't worry, it will be brief and then I'll begin work on CJ's.   So here we go!

Santa's Seven Miler is a fun run in Williamsport in its fourth year.  Its hosted by Elite Feet, Inc., a fantastic running shop that offers personal service that is second-to-none.  Runners (dressed in holiday attire) meet in the lobby at the Holiday Inn, pause for a quick photo op (see below) then its off we go! 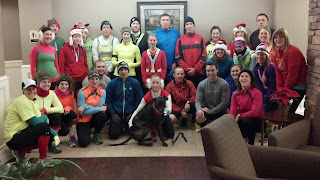 We run across the bridge, to the river run, all the way to "Candy Cane Lane" to admire the Christmas decorations.  Then its back the way we came and a quick loop through town and back to the hotel.  Drinks and merriment at the bar follow.  A good time was had by all and as far as I know there were no injuries despite the slush and ice on the roads and sidewalks.  Its such a fun time that I can't wait to do it again.  Its the Friday before Christmas in case you want to add it to your calendar too!

And as for year end mileage- I had set several running goals at the beginning of the year and have already reviewed those goals when I hit my 1000 Miles in a previous blog.  I ran my 1000th mile for the year on October 31st, 2013.  I ran my second marathon, Harrisburg Marathon, a few days later.  Then running fell (sadly) low on my priority list while planning and organizing CJ's Resolution Challenge gathered steam.  However, I did manage to eek out a few more and wrapped up the year with a grand total of 1161 miles, which included fifteen races.
I accomplished a lot in 2013.  I ran two marathons and made major progress, my time for the first was 4:24 and for the second was 3:55.  I got first in my age group at a 5k and have placed at many others.  I beat my husband at both trail races we ran together (hee hee!)  I've inspired friends and family members to get moving.  And have helped raised nearly $11,000 for autism.  So while on the subject of goals, now might be a good time to throw down goals for 2014.

Some hefty goals in there.  But with the risk of sounding completely cliche, each of us has the potential to do whatever we set our minds to.  Seriously!  Realize that it won't always be easy.  Devise ways and plan ahead for those moments when it gets tough and you might want to quit.  And when all else fails, have faith and just keep putting one foot in front of the other.  May you all have a blessed 2014, and thanks for reading.
Posted by Janell at 8:13 AM