If you know me at all, you know it pains me to write my blog out of sequence.  I made an exception for the Philly Marathon because it helped me get over that disappointment.  So even though I really want to write about CJ's, I must wrap up some of the highlights of 2014.  So first, from October 19th, the Tussey mOUnTaiNBACK 50 Mile Relay and Ultramarathon.  This is such a cool event that I had kind of heard of but never really paid attention to until my tri-team, Team Taper, decided to take a few teams.  You can run it solo as an ultra, or team up with other runners for a team of two through eight.  My team, Ciao Belle!, consisted of myself, Barb, and Sayard.  My hubs was on a team called We're Tapering with Dennis and Ed.  Our final team had six runners, Kelley, Lisa, Elizabeth, Jim, Laurel, and Michelle and called themselves MMMmmmGood.  This was only my second relay, and I am a big fan!  They are such fun!!!  My first was the 100 on 100 in Vermont, and I loved it.  If you ever need another teammate for your team, think of me!

So my husband's team had been picking on my team quite a bit in the month leading up to the race.  All in good fun, but they really lit a fire under each of us.  Their team order was Dennis, Aaron, Ed and our team was Sayard, me, and Barb.  Dennis arrived at T1 before Sayard and I panicked a little!  Aaron took off down the hill and around the bend before Sayard arrived.  So I took off as quick as I could.  Once I got around the bend I caught a glimpse of Aaron's orange shirt, and I knew it, I was going to catch him.  Our first leg was four miles, and I didn't catch him until about halfway through, but I caught him, passed him, and put distance between us.  Once done I looked at my watch and realized I had run an average pace of 6:36!!!!!  Say what!?  The entire leg was downhill, but still!

Barb kept distance between our two teams but we still didn't have a commanding lead, so all during my next leg I was afraid Aaron would catch me.  This leg was also completely downhill and only 3.4 miles long.  My average pace for this one was 7:19.  Again I say to you, say what?!  By my third leg we had worked more space between us and the boys, and I was starting to get tired, but I still ran the 4.3 downhill miles with a 7:55 pace.  For my last leg we had a pretty good lead over those boys (hee hee), but man I was dog tired.  And this was my longest and an almost all uphill leg, ouch!  I walked the worst of it and was majorly slow with an average pace of 10:23 for the 5.3 miles.  I was so happy to be done!

Next up, the Nittany Valley Half Marathon on December 7th.  I had run the Philadelphia Marathon on 11/23 and it was a major disappointment for me.  Running this half was a last minute decision.  I knew my friend Shelley was planning on running it, so I got in touch with her the day before the race to see if I could tag along.  Luckily, they had a spot in their car for me!  So I met up with Joel, Shelley, and Tricia to ride along to State College together.  It was cold and very windy that morning. My half marathon PR was 1:49:08, and I had no plans whatsoever on trying to beat that this day.  I thought I'd just be happy to sub-2 due to the cold and the fact that I had run Philly two weeks prior.  At the start I made a conscious effort not to try to keep up with Tricia and Shelley, because they are both faster than I am.
I felt really good and warmed up pretty quickly.  I was listening to music, something I never do anymore unless on the treadmill, but I felt there was safety in numbers.  I mentally broke the race down into shorter segments and just focused on getting 5k, then 10k, then 10 miles, then the last 5k.  I didn't bother looking at my watch because I just didn't want to feel any pressure.  However, at the ten mile point I just had to know and I took a peek.  I realized I could PR!  I knew that the last 1.25 miles were up, but I still thought I could do it.

The final hill was seriously not that bad.  I think what's hard about it is that you think you've reached the top, but you have to turn left and keep climbing.  Then you think you've reached the top again, but again you have to turn left and keep on climbing!  Fortunately, Shelley had given me a heads-up on that so I was prepared.  So I did in fact eek in a new half marathon PR with a 1:48:43, average pace of 8:18.  I even placed!  I got third of thirty-three in my AG (F30-34), and overall I was 158/533.  This race felt like redemption from my poor performance at Philly.  It reminded me that no matter how we train or how we prepare, everyone has bad days.  Those lows have to be felt so you can truly appreciate the highs. 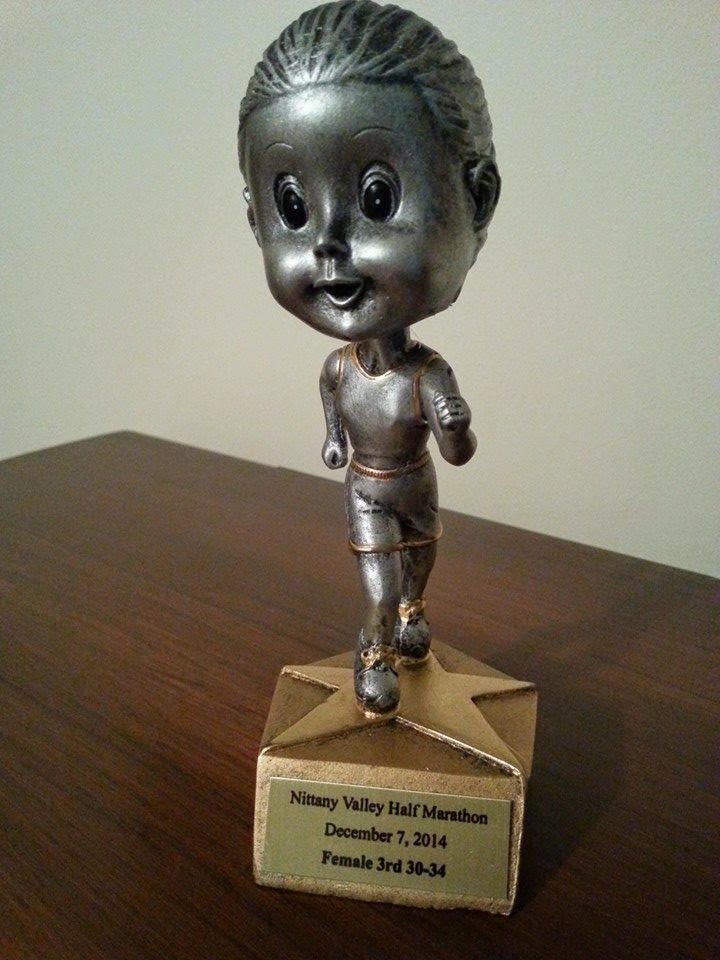