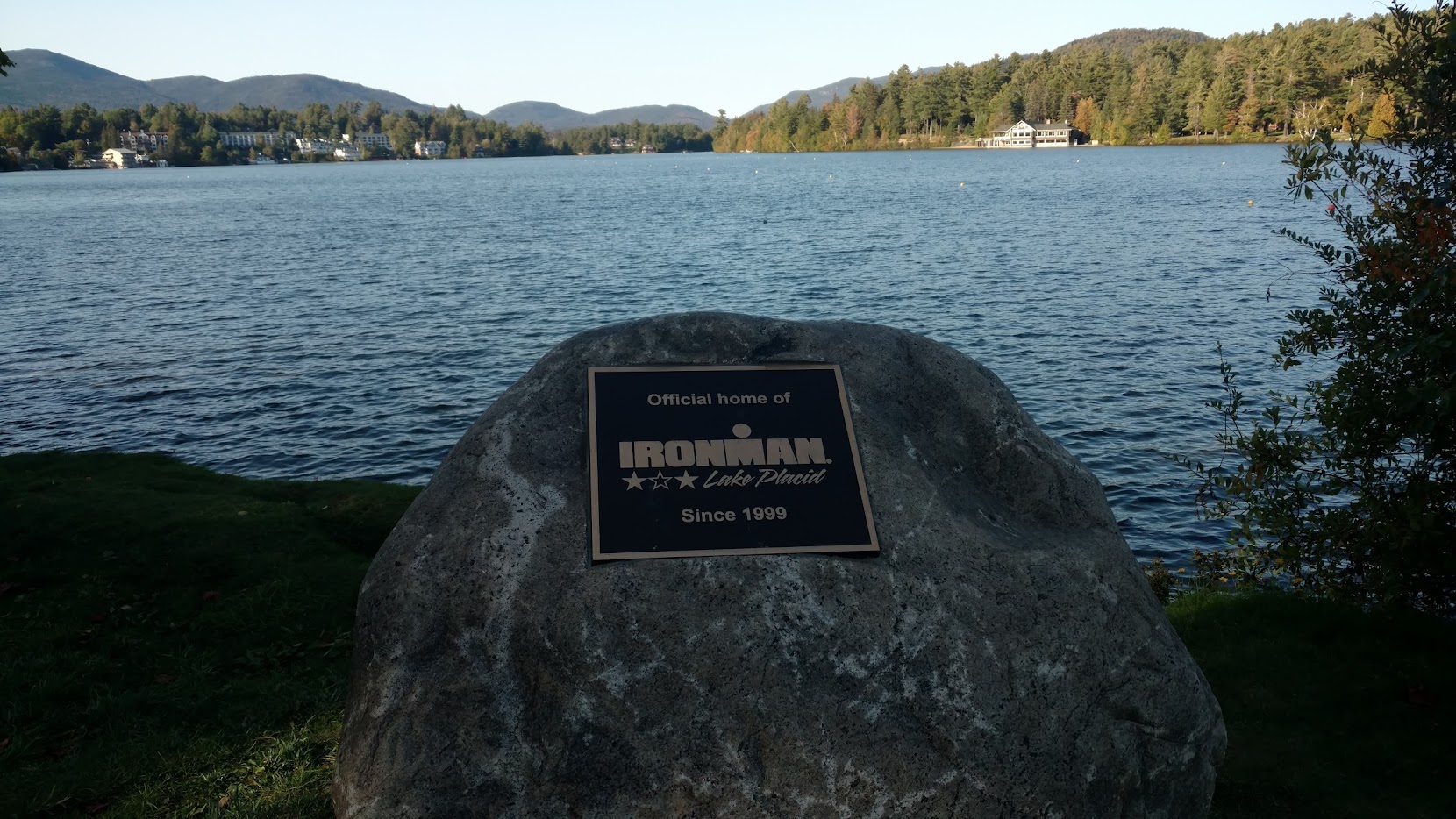 My third 70.3 of 2017 was the Inaugural IRONMAN 70.3 Lake Placid held on Sunday, September 10th.  I gotta say that even though I felt strong and healthy in general, I was also pretty tired and worn down from the year.  I had no idea what to expect from myself at this race.  That's an unsettling feeling.  And being without a time goal left me feeling a tiny bit lost.  So I resolved to go to Placid, do my best on race day (whatever that may mean), and enjoy the experience.  I love the challenge of training and triathlon, and sometimes I have to remind myself that I am crazy lucky to be part of it at all.

I know we're only two weeks out, but details are already a bit blurry for me, so bear with me as I try to remember the order of events!  I caravanned up to Placid following friends Lynn and Charlie.  We made pretty good time arriving mid-afternoon.  I'm pretty sure I unloaded the car and then made way to packet pick up with Team Taper teammates Lynn, Laurie, Ami, Eric, and Chris.  We all checked in and then hit up the expo.  I was in search of gloves.  I have never worn gloves while biking before, but was pretty sure I would need them on Sunday.  The expo didn't have any, but I did snag new goggles, socks, and a sticker for my car.  Then our group went down to the bike shop in town, High Peaks Cyclery, where I was able to grab some gloves.  We had planned to head back to the houses, but when we came out of the store it was raining!  So we stopped in at Lake Placid Pub & Brewery for a pre-dinner beer.  They actually crafted a special 70.3 brew just for the event!  While sitting at the bar, we chatted about the race and triathlon in general while trying to firm up dinner plans with the teammates that weren't at the bar.  We ended up going down to Lisa G's.  By the time we were done with dinner it was dark and much colder out and we had over a mile to walk back to the house.  I was soooo tired and not dressed appropriately at all.  I was hoping to make it to the mandatory athlete briefing that night, but it didn't happen.


The next day held an orientation swim, followed by a drive on the bike course (thanks for navigating, Lynn!), bike check in, mandatory athlete briefing, lunch at "46 Sandwiches" (aka Big Mountain Deli and Creperie), grocery shopping, and finally dinner in.  Our house was tucked in so early that I blogged about my race at Rev3 Williamsburg before getting ready for bed.  Then, looking for encouragement, I read and reread my coach's words, watched the Nike motivational video a few times, and something else I've done since my first OWS tri to help me through the race, I selected a song that through training spoke to me and then listened to it a dozen times.  Laugh if you will, but a song in my head stuck on repeat gets me through the swim and seems to start playing again when the going gets tough on the bike or run.  The song for Placid was Hard Love from Needtobreathe.


Next morning, 4am wake up call.  Because we were so close to the swim start and transition, I decided to go set up my transition then come back to the house before going to the swim start.  This worked out really well because I was able to get a few more calories in my nervous belly than I would have normally been able to, I stayed warmer longer, plus indoor plumbing trumps porta-potty any day.

Once I began my walk back to the swim start I met up with Larry, Chris, and Eric.  We lucked out and found space inside a warming tent to hang out while we waited.  Next summer marks twenty years of the full Ironman at Lake Placid.  So they acknowledged several of the athletes who were present at that first race who were also present at this first Ironman 70.3 Lake Placid.  Then they had the same vocalist sing the national anthem that sang at the first IMLP twenty years ago.  Very cool.  Very classy.

Then the energy really began to buzz.  It's impossible to ignore, at least I think so!  I love the start of triathlon.  I'm smiling.  I'm dancing.  The race announcer dude walks over and gives me a high five (highlight of my day!)  Before I know it, I'm in line to start my swim with Chris, Larry, and Eric.  There were two chutes set up and the volunteers were releasing four swimmers at once.  The four of us got to start together!  Super, super cool.

Swim - 1.33 miles  (oops!)- 42:44 - 1:52/100yd
Yeah, that was a long swim, ha!  I was intentionally on the outside of the pack and was truly enjoying all that open water, but I guess it cost me.  There was a little bit of fog which made sighting a bit tricky, but I never would have guessed that I was adding that much to my swim.  The water was cool, I'm told 63°, with an air temperature in the forties.  I thought the swim felt great, but I was concerned about how numb my hands and feet would be.

T1 - 0.42 mile - 10:04
I was right to be concerned!!!  My hands and feet were like blocks of ice.  This transition is a long one when you're body cooperates, longer still when it doesn't!  I got to my bike, dried off best I could, jacket on, sock, shoe, sock, shoe, glasses, helmet, left glove (really difficult), right glove (impossible!!!)  I tried for what felt like an eternity to get that damn glove on, nearly left it behind but knew that it was necessary, so I unracked my bike and made my way to Bike Out hoping I'd find a volunteer to assist me.  Success!!!  There were two volunteers right at the Bike Out inflatable and after another minute she and I were able to get that right glove on.  Hallelujah!

Bike - 55.86 miles - 3:12:36 - 17.4mph
Yay!  The bike!  I love my bike!  There is a decent amount of climbing on Placid's bike course, but I wasn't concerned about that.  I was nervous about Keene Descent.  It is really long and steep at places and I knew there would be some athletes who would hammer down that thing as fast as possible.  I'm fairly conservative (okay, frightened) on downhills, and this one is a doozie.  On my bike preview drive the day before we came across a couple on their bikes.  We watched them coasting at thirty miles an hour and not once crank the pedals.  Eek!  So anyway, out of transition, down through town, and then you start to climb.  I felt amazing and was glad I spent ten minutes in transition because those gloves were necessary!  First five miles averaged 15.4mph, second five miles average 17mph.

When I reached the bottom all I could do was laugh because I had done it.  I did it!  And it wasn't nearly as frightening as I had thought it would be!

Then you begin this awesome stretch of flat where you can get aero and just go.  Next twenty miles average speed (in five mile splits) were 22.7mph, 22.2mph, 20.4mph, 19.2mph.  And then the last twenty miles you spend climbing.  Those splits came in at 14.5mph, 15.2mph, 12.5mph, and 14.8mph.  Those splits are slow, but I feel pretty good about it.  I do have a whole new level of respect for anyone who has completed the full course there.  Holy moly.  To have to do that bike course twice pre-26.2 mile run is a major feat!

My nutrition was not perfect but sufficient.  I did finish a whole bottle of Tailwind and some of my second bottle, forced down my Lara bar a little after halfway through the bike and ate at least half of my cola chews.

T2 - 0.17 mile - 3:04
The second transition was much better.  My feet were still totally numb, but whatever, at least my fingers worked.  Rack bike, helmet off, jacket off, shoe, shoe, grab visor and race belt, GO!

Run - 13.14 miles - 2:06:56 - 9:39/pace
Out of transition is downhill.  My feet were completely numb, which is an odd sensation, but my shins were hating me for the descent.  My shins don't normally bother me so I was hoping that once down the hill they'd be okay.  I totally planned to utilize my "Walk-All-Aid-Stations" strategy that worked so well at Williamsburg.  Aid stations every mile mean a little walk break to look forward to every 8-10 minutes.  Yay!  I was trying to ignore the fact that I had to pee really bad.  I knew stopping to take care of business would just be not good.  However, it became all I could think about, so shortly after the five mile marker I ducked into a porta-potty.  And I was right, it was not good a good thing and starting back up again hurt.  It began to feel like I would never reach the turn around point and I realized my mind was entering that dark, hopeless place it can sometimes go to when things get hard.  I doubled down on my efforts to smile and thank volunteers, but it felt forced.  When I got back to the ski jump I knew I didn't want to walk, but that hill looked never ending.  I gave in.  Once to the top of that though, I began to feel hopeful because I knew that I really was on the homestretch and that there would be a lot more crowd support for the portion of the run ahead of me.  I thought the gas station hill was better/easier than the ski jump hill because it wasn't as long, even if it was steeper.  Also, there were people there encouraging the athletes, which was not the case when climbing the ski jump hill.  There was one French speaking woman who said "Go Zhanelle!" and I was like, "Ooh la la!"  So then you get right in front of the Olympic oval but you can't go finish yet.  You gotta make a right hand turn for another out and back before you can cross that finish line.  Our house was very close to the turn-around and Charlie was out there cheering on the athletes and taking photos.  I knew I only had about a mile to go, but I just couldn't pick up the pace anymore.
Splits: 8:35, 8:50, 8:37, 8:53, 8:53, 10:08, 9:35, 9:30, 9:59, 10:41, 11:10, 10:53, 9:53, (0.1) 8:40

Running into the Olympic Oval to finish was amazing.  Very, very cool.  As I approached the finish line I thought back to the other 70.3s I had completed, all the hours spent training, all the sacrifices made to get to that point, and about how far I've come since the very beginning.  The finish line is a really emotional place for me and I think that feeling is one of the reasons I keep coming back.
Official time - 6:15:42
31/127 AG (F35-39)
142/820 Overall Females
684/2056 Overall

This trip, this weekend, was really a memorable one.  I truly am grateful for all that triathlon does for me.  It's hard to explain, why I love it so much, why it's so important, why it has meaning to me, or what that meaning even is.  Sometimes I think becoming an athlete has been less about the workouts (as much as I love them) and more about realizing for myself what I have always been capable of- that achieving the "impossible" was, in fact, always within me.  Every time I go farther or faster or do something I didn't think I could, I catch another little glimpse of that.  Who wouldn't love that?

My next adventure will be volunteering at IRONMAN Louisville next month.  I'm extremely excited to be able to go to Kentucky and assist those athletes during their 140.6 mile victory lap.
And soon it will be my turn to hear those magic words...